Members | Sign In
ScannerDanner Forum > Post your repair questions here
The ecm1 fuse blows after the engine runs for about five minutes, I checked for voltage at the fuse and with the fuse removed I am getting 12.5 volts on both sides of the fuse terminal. I checked the wiring diagrams and one shows that fuse going to the injectors and ecm. I disconnected the ecm and the injectors and still had same reading. another diagram show the ecm1 fuse going to the ignition voltage on the icm. what should I try next. Thanks For any Help
page   1
12 replies

Chris said May 08, 2016 01:30:34
Next step would be a good visual inspection of the wiring harness. The diagram I found shows power to the ECM, injectors and ICM. I'd start in those places and look for a rubbed wire.

You can pull the fuse and connect a DVOM to the out side of the fuse and the other to ground and check for continuity to ground while wiggling the harness.

If all this fails it's probably best to get an low amp clamp and start looking at current flow thru each component and try and isolate which one shorted. 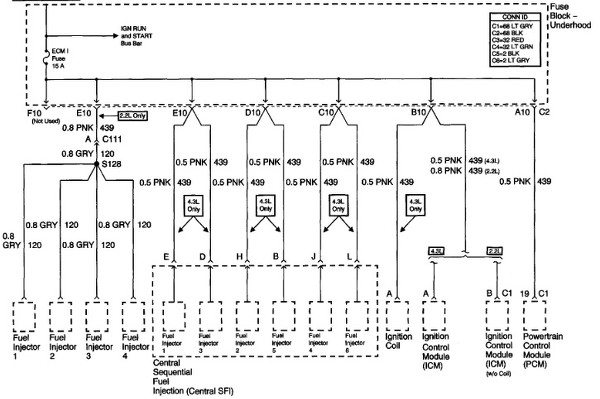 I think your second diagram was correct. According to this diagram, the ECM 1 fuse feeds the injectors, the ECM, and the ICM.

Good move by disconnecting the injectors and the ECM. Obviously, the ICM is next, and it makes sense that'd it would be the culprit, given that it's the highest load component of everything on the circuit.

I'm gonna guess that one of the coils is shorting after the engine warms up, but we'll see! Let us know if disconnecting the ICM takes power away from one side of the fuse, and we can go from there.
[Last edited May 08, 2016 01:37:25]

Chris said May 08, 2016 05:59:44
I'm wondering if there is a Zener diode on the injectors. I know a bad one can cause fuses to blow on AC compressors but not sure if injectors could produce enough flyback current to pop a fuse.

EugeneTuorto said May 08, 2016 12:15:44
ok both coil packs are cracked open with corrosion inside and a burnt smell to them.

EugeneTuorto said May 08, 2016 12:32:59
with the icm plugged in without coils the fuse does not blow so i am off to the auto parts store for some coils.

with the icm plugged in without coils the fuse does not blow so i am off to the auto parts store for some coils.

For what it's worth, I'd be very tempted to get a new ICM in there, too. I can imagine how the ICM may be shorting internally, causing the coils to overheat/crack/burn. Never heard of it, but stranger things have happened.

Thanks for getting back to us on this one, let us know how the new coils work out!

EugeneTuorto said May 08, 2016 16:14:38
its up and running, ran it about 20 minutes with no problem so far. heres a link to picks of coils. https://drive.google.com/file/d/0B5ds7R75XXuBZ3pSdXB4RVQzYXM/view?usp=sharing

Tyler said May 08, 2016 17:40:36
Lol, stick a fork in those coils, 'cause they're DONE. I think it's a wonder that the truck started at all, given how the cases are cracked. I'd expect the secondary voltage to leak to ground.

Glad to hear the truck is up and running! Oh yeah, I forgot to ask, did the voltage disappear from one of the fuse terminals with the failed coils unplugged? I was trying to think of how the ICM/coils could be backfeeding voltage into that circuit.

Tyler: did the voltage disappear from one of the fuse terminals with the failed coils unplugged? I was trying to think of how the ICM/coils could be backfeeding voltage into that circuit.


I was wondering about that myself. Doesn't look like the ECM1 fuse directly powers the ignition coils on the 4cyl S10 like it would for the 4.3l.

Chris: If all this fails it's probably best to get an low amp clamp and start looking at current flow thru each component and try and isolate which one shorted.


I think that's a wicked good idea, I wish I had thought of that!

That would be dependent of course on the fuse not being blown, and for that matter with power on each side of the fuse terminal with the fuse out, voltage potential would be equal, which would in turn mean no current flow, right? So how does this result in a blown fuse? Not nit-picking, just trying to see all the angles.

Wow, ugly coils! Think that's something that just "happened", or possibly a symptom of an underlying problem? Certainly can't argue with the results, I'm probably just being over analytical.
Massachusetts, USA

EugeneTuorto said May 09, 2016 19:35:01
I have had this truck since it was new and those coils have over 190K on them, they look like they have been cracked open and corroded for some time. I may go ahead and replace the icm just to play it safe.
page   1
Back to Topics
Login below to reply:
get your own embeddable forum with talkiforum.com