Members | Sign In
ScannerDanner Forum > Post your repair questions here
The van will not start when cold unless i use staring fluid.
Once the van is warm it will start right up.
It has a bad misfire off of idle and no power. The fuel pressure is 38 psi
if i restrict the fuel return line and raise the fuel pressure to 78 psi the misfire goes away and it runs and drives like normal.The ecm is also sending a constant 12 volts to the fuel pump relay when the key is switched to on
I have checked the power and ground to the high and low fuel pumps they are both good Ive replaced the fuel pumps filter and the pressure regulator.
page   1 2 next last
23 replies

Ive replaced the fuel pumps filter and the pressure regulator.

Noah said May 12, 2016 12:34:33
Sucks there's no live data for these early Fords. Once you have it running, does it seem any better once you get it up to cruising speed?
Fuel pressure is pretty close spec, 78 seems kind of low for a dead head test, but I wouldn't go changing the pumps again just yet.
I'm wondering if the egr valve is stuck open. That would explain the suck idle, lack of power and why it would fire on starting fluid even though you have good fuel pressure. At idle, an open egr I'd essentially a big vacuum leak.
Of course, it wouldn't be a bad idea to pull the plugs and see if they have any stories, and have a look at the cap and rotor and all that hoopla.
Massachusetts, USA

Dylan said May 12, 2016 17:27:40
Question is what causes this lack of fuel pressure. Like Noah says we have no live data.
We should have a closer look how the fuel system operates. Maybe Tyler or Noah, can you guys get some more feedback on this one?

Once the van is warm it will start right up.

So it's temperature related.

RobBrown said May 12, 2016 20:30:17
What type of fuel injection system does this engine have? I'm recalling the SD video with the CMPFI Blazer with the mechanical poppet nozzeles where low cranking pressure couldn't overcome the mechanical threshold of the nozzles so they wouldn't squirt, but then propane helped it get going and then the higher running voltage helped maintain adequate pressure and also allowed the truck to retain adequate pressure for subsequent restarts.

Also, have you actually checked voltage at the pump? Could be excessive resistance in the pump feed wire or a bad ground that are sucking voltage on that first initial cold crank that are mitigated by higher running voltage and residual pressure on later warm starts.


Just a dude who found a sudden and unexpected passion to bless folks who can't afford auto repair with free help. I never, ever imagined this is how'd I'd be spending my free time:-)

RobBrown said May 12, 2016 20:32:19
That truck also suffered under load....which again points to fuel delivery/pump issues.
Just a dude who found a sudden and unexpected passion to bless folks who can't afford auto repair with free help. I never, ever imagined this is how'd I'd be spending my free time:-)

JasonDelamarter said May 12, 2016 22:44:42
I have checked for 12 volts and the ground under load they are both good. The problem began when the low pressure fuel pump went bad . I had to replace the tank sending unit as well.
I noticed when the rear pump failed the ecm was not priming the fuel system and shutting off it was running constantly.


Maybe scope the upstream O2 sensors and do a WOT test to verify that you indeed have a fuel delivery problem (it sucks not to have live data).
Keep us posted.

RobBrown said May 13, 2016 15:50:21
Okay...I think I was missing something in your description. You're saying that when the key is in run (not cranking) the fuel pump relay is sending a constant 12v to the pumps and they are running all the time?
If that's the case, it seems there's a potential your EEC is fried. From what I can gather, this system, like most others, should be priming the pumps and then shutting them down until you crank. If you've got a constant 12v coming from the fuel pump relay (or better, on the control side of the higher current side of the relay), I think your problem is upstream of that...i.e. the EEC module.
Just a dude who found a sudden and unexpected passion to bless folks who can't afford auto repair with free help. I never, ever imagined this is how'd I'd be spending my free time:-)

Noah said May 14, 2016 13:04:56
The Electronic Fuel Injection (EFI) system is a multi-point, speed density fuel injection system. Fuel is metered into the air intake stream in accordance with engine demand through injectors mounted on a tuned intake manifold.

An Electronic Engine Control computer (EEC-IV) receives signals from various engine sensors and computes the required rate of fuel flow to maintain an optimum air/fuel ratio throughout the entire range of engine operation. The computer then sends a command to the fuel injectors to meter the appropriate quantity of fuel.

The EEC-IV engine control system determines and compensates for changes in altitude (i.e. from sea level to mountains). This system will also automatically compensate for the age of the vehicle and its uniqueness. For manual transmission vehicles it will also allow for push-starting if it become necessary. 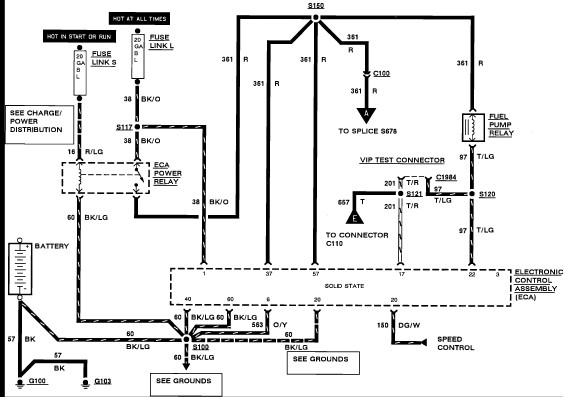