Members | Sign In
ScannerDanner Forum > Post your repair questions here
Pickup had a voltage drain, alternator bearing problem. I put a new (not rebuilt) alternator on. I found the cause of the voltage drain, trailer brake switch with a short. Now after charging the battery and attempting to start the vehicle, it won't stay running and a message comes on the display, "battery not charging". I had the alternator put on the bench, tests OK. Can my problem lie in the ECU, because of all the dead bat,charge bat, dead battery, charge battery?
page   1 2 next last
22 replies

cheryl hartkorn said Jul 07, 2016 23:24:26
do you have a scope? or multimeter capable of measuring duty cycle? you have power at the large red wire? on the brown wire back probe or pierce the wire check for a duty cyle percentage. if you don't have any try wiggling the connector. ive seen bad connectors before cause a no charge intermittently. also measure from negative battery terminal the alternator case on voltage scale and look for less than .5 of a volt. while running. any dtc's?

When you say won't stay running, are you talking about a start/stall kind of symptom? As in, it starts but dies immediately? Something like that could easily be explained by the PCMP battery feed going low, and losing it'seems stored idle air control adaptives. If the IAC and throttle body are clogged with buildup, then you end up starving the engine of air.

An easy way to check for this is to hold the throttle open during cranking. If it now starts and runs, then we can look closer at the idle control system.

Phillip Patterson said Jul 09, 2016 00:02:58
Cheryl, I don't have a scope nor the appropriate multi meter. I have to recheck the wires on the plugin on the Alt.
Tyler, Yes, it's a start/stall. I never had an issue before the alternator change and searching for the battery drain. Also, after the install and drain issue solved, the truck started and ran multiple times, then after one day of sitting, it started, I moved it out of the way and went later to start it and move it, it wouldn't stay running after starting.

Tyler, Yes, it's a start/stall. I never had an issue before the alternator change and searching for the battery drain. Also, after the install and drain issue solved, the truck started and ran multiple times, then after one day of sitting, it started, I moved it out of the way and went later to start it and move it, it wouldn't stay running after starting.

Ah OK, so this is a new symptom, understood. Right now, it's tough to say if this is related to the previous repair, or the ECM.

Any luck with getting it to stay running by holding the throttle open? Not trying to nag, but it'd answer a lot of questions if it does stay running that way.

If it still doesn't stay running, then I'd suggest backing up and approaching it from the beginning. Obviously it has spark/fuel/compression in order to start, but which one are you losing when it stalls again. Start/stall is also a symptom of some anti-theft problems, so scanning the ECM for codes may be a good idea as well.

Phillip Patterson said Jul 09, 2016 22:43:14
I ran a diagnostic scan. No codes. When I turn the key on, the voltage meter shows low voltage, as in needle barely moving. Throttle open doesn't keep the engine running.
What I also found is when key is on, electric window won't work but as engine starts, window works until engine stops but volt gauge doesn't move.
[Last edited Jul 09, 2016 23:47:58]

Phillip Patterson said Jul 10, 2016 13:56:03
Glory to God. I thank him for patience. I found the issue but some one will have to explain it to me. TBC 10 amp, is this not Trailer Brake Control? This is where my voltage drain was. I pulled the fuse, voltage drain stopped. I ran the vehicle a few times and then the start/stall began. Just as a "What if", I replaced the fuse, voltmeter gauge goes to 14, vehicle starts and runs. Now I have removed the (under dash) plug for the trailer and will check for voltage loss. WISH ME LUCK. 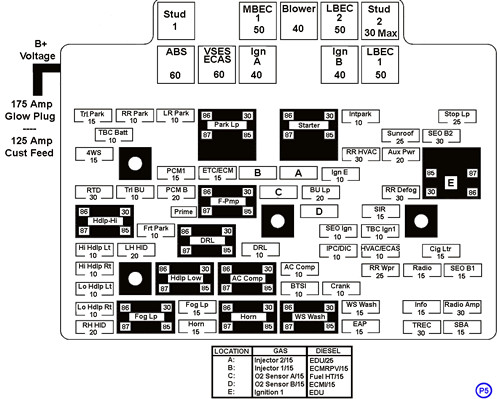 It's tough to post the diagram from my phone, but that fuse powers the BCM and theft deterrent module. That would go back to an anti-theft problem causing the start/stall symptom, but I can't yet explain why didn't start immediately after pulling the fuse...

By the way, thanks for keeping us informed of your progress! Let us know what you find.

Phillip Patterson said Jul 10, 2016 14:47:50
Well, all is well in the world. Thank you ALL for your help and ideas. I really like this forum and will be talking to all of you again soon. Take care and God Bless.

page   1 2 next last
Back to Topics
Login below to reply:
get your own embeddable forum with talkiforum.com